There’s so much that we share that it’s time we’re aware, it’s a small world after all! It’s one of the most iconic and recognizable attractions at the Disney parks, and its accompanying song is known the world over, but do you know the history behind “the happiest cruise that ever sailed?”

Back in 1964, Walt Disney was given the task of creating an attraction for the World’s Fair in New York with the theme “peace through understanding.” After much thought, he decided featuring children from all over the world would be the basis for carrying out this theme. Walt turned to famed artist Mary Blair to design what would become the most recognizable Disney attraction ever built. Mary had worked on other Disney projects, namely the storyboards for a number of animated feature movies, but this would be her biggest undertaking of all. For Small World, she created stylized animatronic dolls, backgrounds, and animals to highlight various regions of the world but with her own twist. Mary was known in the art world as a color genius! A pink elephant in Asia? Sure! A purple hippo? Definitely! There were no rules with color when Mary was at the design board!

After its success at the World’s Fair, Small World was moved to Disneyland where it has taken up permanent residence in Fantasyland. When Disney World opened in 1971 Small World became an opening day attraction. Since then it’s also been opened at the Disney Parks in Paris, Tokyo, and Hong Kong. One thing’s for sure, even if you’ve never ridden “It’s a Small World” before, chances are that you still can’t miss it when you pass it in the parks. Most of the outside facade displays the trademark colorful “building blocks” castle that Mary Blair made famous, and if you’re watching the clock on the quarter-hour, you’ll see it open and the time displayed! It’s a real treat to watch!

When you load the ride you’ll be put into a boat and start your cruise through Small World. You'll sail through Europe, Asia, Africa, South America, the South Pacific, and finally the finale of children from all over the world. One fun thing to look for in each room is the sun and moon. As the song says, “there is just one moon and one golden sun,” and you can see that the same moon and sun shine on us all- no matter where we live. And if you’re visiting Small World in Disneyland- there are some fun “Easter eggs” to look out for! Keep your eye out for some of your favorite Disney characters integrated into their various countries of origin! All of the characters appear in the same style of Mary Blair’s original animatronics, so they look like they’re really part of the scene! My children loved finding Lilo and Stitch, Alice in Wonderland, Woody, Jessie, and so many more! And if you’re visiting at Christmas-time, you can see the Christmas overlay throughout the ride!

So the next time you’re in the parks, take this magical boat ride, look for the sun and moon in each room, and enjoy this classic attraction that’s known as the happiest cruise that ever sailed! 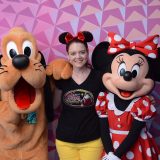